A very lovely feature is the Pory.io features named Linked Records, it’s like in the Inbox block from softr with little clickable columns to display sublist (from linked records).

You can display linked records without having to open a page. To resume it’s a list in a list. It’s not very customizable in Pory, but if the Softr’s team implement this it could be totally awesome 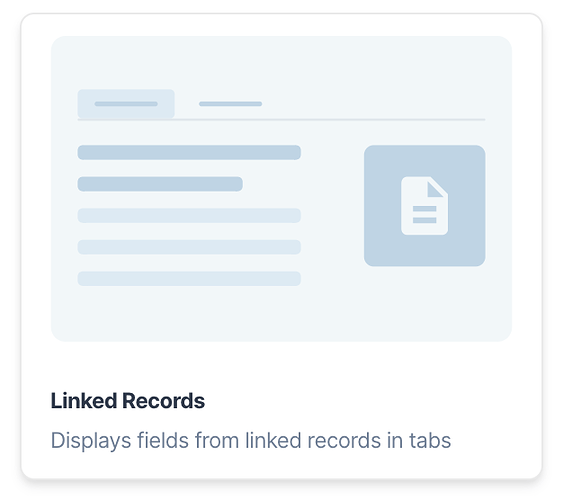 Just a little example to contextualize, I duplicated this template base into Airtable and connected the base to my pory account, I created a list and a list detail with the linked records block, here is the result with a GIF

@Suzie @artur I can share you my app to test if you want, but it’s it’s easily reproducible on their studio

Anyway I think Pory is not at all at the level of softr (which i left for softr precisely) but maybe there are still some user experiences to emulate. the css hover effect is also very nice

This is a great suggestion for a feature in Softr.

Without taking anything away from the need for a feature like this in the future, I think it’s possible you could make something like it in today’s Softr.

Here’s what I’m thinking. Say that in Airtable you have two linked tables, one of Restaurants and one of Menus. And say you want to display the restaurant names along the left side of an inbox, and when a restaurant is selected, you want to show some fields about the restaurant on the right, and then below that a table that displays the menu of the selected restaurant, using the data from the linked record in the Menus table for that restaurant.

Then, in Softr, you could create a hidden page that has a table block on it, and copy the embed code for that table into a field of type Formula in the Restaurants table. In the formula, substitute the record ID* of the embedded menu table block into the embed code, so that the URL of the embed block had the recordId parameter for the menu that the selected restaurant is linked to.

Does this description make sense?

*The one thing I’m not sure about here is how a formula field can get the record ID of a linked record. From a bit of googling, it looks like it would work for the Menus table to have a formula field with the formula RECORD_ID() and then the Restaurants table could have a lookup field with that value in it.

Just tried your solution, very good idea. I’m working on it and will update status later

Having the ability to integrate some dynamics with linked records into our projects, usually requires 2 or more extra steps.

This will probably start changing when forms 2.0 arrive

I really hope softr makes improvements with such an essential and versatile type of record on airtable.

taking this into team to discuss.

Solution here for my problem, working well embedding the block

Thank you all, can’t wait to see the new Softr feature