Glide vs Softr For Web Apps/Logic

I had just finished building my MVP in Glide. With Glide I enjoy how easy and quick it is to build apps with just spreadsheets. The thing that attracted me to Glide was its use of built in logic. This makes things so much simpler as it reduced the number of third party application to simulate logic as I wasted a lot o money on other platforms. Now Glide Apps does have its design limitations but Glide Pages have a lot more freedom in terms of design in exchange for some reduced features.

I was looking at Softr but switched to Glide as Softr doesn’t have the same logic and advanced capabilities of Glide. It did what needed to do.

With that being said I still can’t help but be curious about Softr. I would like to know more about Softr’s capabilities. Basically how good is it at creating web apps because from the examples that are displayed it doesn’t look that advanced but it does seem to have more design freedom.

I’m not taking a jab at Softr, I’m actually curious about what it can do as I might want to give it a second chance.

This site seems somewhat basis but it would be great if you can clear up some misconceptions and share your experience with Softr. 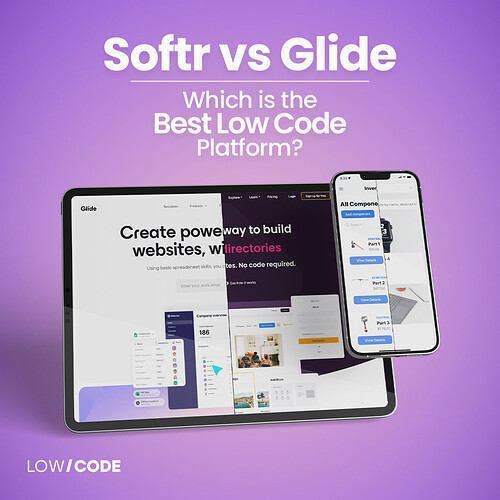 Softr vs Glide: Which Is the Best Low-Code Platform? - The no code blog -...

Which platform should you use to build your next no-code app? Let's take a look at this super detailed comparison between Softr and Glide.

With that being said I still can’t help but be curious about Softr. I would like to know more about Softr’s capabilities. Basically how good is it at creating web apps because from the examples that are displayed it doesn’t look that advanced but it does seem to have more design freedom.

Love the honesty! Curious what you are trying to build, if you are able to share at a high level? We wrote this article comparing the two tools (of course, maybe we are biased, but the article is factual). Would also love to hear from the community on this one as well.

Totally agree with the article!

I personally use Glide to prototype the apps I want to build. Very convenient method as everything is neat for the design (though not really customizable but that’s not what I want from Glide, I just want a clean framework of a mobile/web app)

But as I am much more into external apps => Softr is way more convenient as Glide finds limits quickly in terms of data rows and updates (and design customization).

At the end, the biggest difference between Softr and Glide would be their targeted customers and the type of built apps

(Glide is the king of internal apps in my opinion, way above stacker for example)

Concerning Softr possibilities: for now, as long as you can have some custom codes (and make it … low code!) you can create some pretty decent work. Action buttons will come early 2023 ! That might help you reconsider Softr (I totally understand your point for this, believe me) about logic capabilities.

I agree with your comments, but I think that we should stablish a general overview:

4.In Softr you have blocks that you build as lego, and you can find now as well on Bubble, like a component library that give you an overall about what necesary about premade blocks to be as faster as you can, to cover your client´s necessity.

To sum up, my opinion is that there is not the best option, just the need to be covered just doing it, for this I would you recommend to give an opportunity to develop some projects in Softr and you will change your opinion.

Thanks for the replies. What I would like to see be accomplished in Softr is the following:

This is about all I need.

I real don’t want to use low code but know you have me thinking about learning Python in the next coming weeks. After all it can increase my skills as a founder. Is it Python friendly? I ask because I don’t like JavaScript’s syntax.